Full Name
Representative Rodney Davis
Job Title
Congressman
Company
U.S. House of Representatives
Speaker Bio
Rodney Davis is currently serving his fifth term in Congress representing the 13th District of Illinois, which covers a 14-county region that includes both urban and rural communities in central and southwestern Illinois. Congressman Davis serves on the Committee on House Administration, where he is the Ranking Member, the House Committee on Transportation and Infrastructure, where he is the Ranking Member of the Subcommittee on Highways and Transit, and the House Committee on Agriculture.

During his time in Congress, Davis has worked with his colleagues on both sides of the aisle to be an effective lawmaker. The Lugar Center & Georgetown University’s McCourt School of Public Policy’s Bipartisan Index ranked Davis as the most bipartisan member of Congress from the state of Illinois and the 14th most bipartisan nationwide in the 116th Congress. Prior to being elected to the U.S. House in 2012, Davis served as Projects Director for Congressman John Shimkus for 16 years helping Illinois citizens and communities cut through government red tape and secure federal funding. Davis resides in Taylorville with his wife, Shannon, and their three children, Toryn, Clark, and Griffin.
Speaking At
EnergyInnovates: Permitting and Transmission 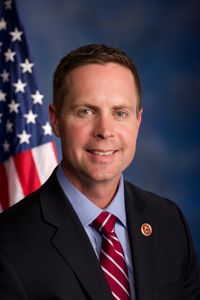